Its fascinating that most actors find the South African accent to be one of the toughest accents to deliver on screen. I personally feel that Tim Robbins takes the cake in “Catch a Fire.” There is always Leo’s role in “Blood Diamond” - you judge for yourself?

Danny Archer, a diamond smuggler played by Leonardo DiCaprio in the (2006) “Blood Diamond”

“Finally Hollywood has brought through its ranks someone who can pull off a South African accent without getting laughed off stage. This has been a point of some concern for South Africans who have seen their lovely accent slaughtered in films like Lethal Weapon 2 and Mission Impossible 2.
It seems to always be racist villains that get lumbered with the task, that and cheesy action sequels. An exception was “the interpreter”, where Nicole Kidman, wisely stayed away from doing a “full blown” rendition and opted for a softer inferred accent. Even so it was still a little crap, and if Nicole Kidman can’t pull it off then who can. Remember she kissed Tom “alien lover“ Cruise with a straight face!.
Strangely enough, South African actors in Hollywood, never get to use their elusive and enigmatic voice in films. Arnold Vosloo was “the Mummy” in the “The Mummy” and would have been much scarier if he was Afrikaans. Charlize Theron, would have been far more believable as a serial-killer-lesbian, if she spoke like us.
Apparently Leo is the man we were waiting for. Leonardo Dicaprio, is the first to my knowledge that has managed to get the subtle guttural tones without it sounding parodic or just plain silly.
He also went one step further to mimic the “meat eating” body language of our fair nation. Our hats are off to him and he is welcome back any time. What is funny though is that American critics slated his accent as being too affected?” - from www.southafricalogue.com

Usually Hollywood movies about Africa and South Africa are a source of hilarity to local audiences as Hollywood tends to get so many details about this country wrong. Who can forget Joss Ackland’s atrocious “Afrikaans” accent as the villainous apartheid-era ambassador in Lethal Weapon II, for instance? Or that ornamental Nazi eagle in his office (come on, which Department of Foreign Affairs official’s office ever looked like that?) Or how about the Nazi-like paraphernalia adorning the podium as the celluloid Jimmy Kruger made his notorious “Biko died after a hunger strike” speech in Cry Freedom?

But what South African audiences usually find the most entertaining (or insulting, depending on your sense of humour) is when Hollywood actors attempt a Seth Effrikan accent. (One can only imagine how they have mangled other “ethnic” accents in the movies throughout the years then, particularly in all those movies featuring the poor Russians as villains!)

However, in Blood Diamond we’re happy to say that while DiCaprio doesn’t always get the accent right, he at least gets the character spot on. Or maybe the role was just well-written, as the screenplay at least seems decently researched with an eye for detail and an ear for the local tongue.

“Doos,” DiCaprio’s character murmurs when faced by an officious soldier, which had the audience I was with laugh appreciatively. DiCaprio has aged well enough to fit this role; no longer the fresh-faced boy star of Titanic, he is more credible as a tough action man than, let’s say, the soft-faced Colin Farrell in Miami Vice. Cynical and opportunistic, DiCaprio comes off like an boer seun Han Solo, spouting the sort of political incorrect dialogue one imagine a character like him would in real life.

Blood Diamond gets other things right too, mostly by casting local actors such as Arnold Vosloo and Marius Weyers as Afrikaner diamond smuggling heavies. One detail that is straight out of the Hollywood cliché rule book though is when DiCaprio’s character visits the Stellenbosch vineyards of his employers and there are machinegun-wielding heavies all over the place guarding it like one always sees with Columbian drug lords in the movies. Very unlikely. ”

Matt Damon is now responsible to deliver our Rugby hero Francois Pienaar’s Afrikaans accent - hopefully with the real rugby players’ lingo - in the upcoming film, where with Morgan Freeman they are to reprise South Africa’s World Cup victory in 1995. 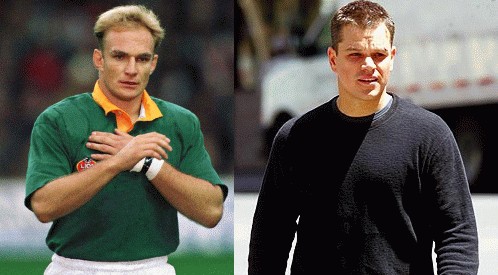 Is Matt Damon rugby rugged? Whatever your answer, we are looking forward to seeing this time relived, as it marked the rise of a troubled South Africa guided by the unifying force of our nation’s father, Madiba.